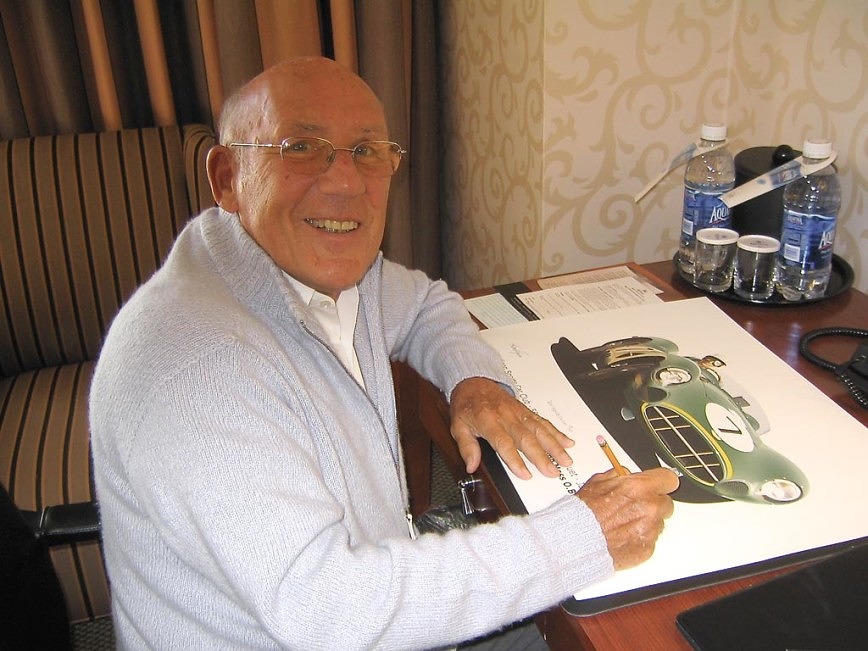 Sir Stirling Moss didn’t ride in on the knight’s proverbial white horse but when he came across the tarmac at the Madison, Wisconsin airport he was alighting from one of largest private jets to arrive that day. Sir Stirling and Lady Moss (immediately Stirling and Susie to all their new-found friends) had scrapped their plans to drive from Rochester, Minnesota (where they had just completed their annual medical physicals at the Mayo Clinic) in favor a hitching a ride on another new friend’s corporate jet. They were coming to help the Madison Sports Car Club celebrate its 50th anniversary with a pair of gala dinners, tons of autographs, interesting stories and just being themselves.

Thursday evening, once settled at the hotel, they joined Race Legends president Donn Gurney (his United States agent) and Gurney’s family for a private dinner to kick off the long weekend of public appearances. Stirling and Susie, hardly suffering from jetlag after a 20 minute flight, were still tired from three days of the usual tests at Mayo and welcomed some quiet time in a private setting. As usual, the women gathered around Susie while the men heard Stirling discuss everything from his start in racing to how much money changes hands each day in Formula 1.

The Madison Sports Car Club staged a VIP dinner Friday evening for about 50 people who joined Sir Stirling and Lady Moss in a private dining room. Each guest received an autographed event poster and a signed model of the Mercedes-Benz 300SLR – the actual 722 car that Stirling won the 1955 Mille Miglia (accompanied by navigator Denis Jenkinson), setting a record time that stands today – some 50 years later! Conversation, autographs, photos and good camaraderie filled the evening until almost midnight and everyone went away marveling at the charm and hospitality of this knight and his lady.

Saturday evening featured the big event with some 300 plus guests arriving as early as 4:30 for the 7:00 dinner. The early hours were filled with Stirling signing prints, books, photos and other automobilia while Susie worked the crowd, winning new friends with a smile and easy conversation. Finally, as the cocktail hour wound down the crowd was treated to a specially catered dinner and then on to the big show.

Donn Gurney, acting as moderator for the entertainment, introduced Wisconsin resident and internationally famed former racing driver, Augie Pabst, who came to the stage to present Stirling with the obligatory Wisconsin gift – a cheesehead hat. Stirling took this somewhat startling presentation in good humor and said, “I’m not quite sure I should have this but now at least I can cheer for the Packers.” This remark drew applause as any reference to the Green Bay Packer will do in the heartland of Wisconsin.

Gurney and Moss then drew up stools, pinned on microphones and sat in front of a towering close circuit TV screen and began what turned out to be 90 minutes of stories, anecdotes, political opinions, reminiscences, character analysis and a full range of subjects. Gurney pitched up the softball and Moss hit it out of the park. For the full hour and a half the crowd sat absolutely silent, listening to every word from the master of race driving himself.

All good things have to end some time and some time in Madison approached the witching hour before Stirling and Susie were escorted back to the hotel and the event wound down. The initial response was outstanding and messages are still arriving complimenting the Madison Sports Car Club on its 50th anniversary celebration – A Night with Sir Stirling Moss.

President and Co-founder of Race Legends.