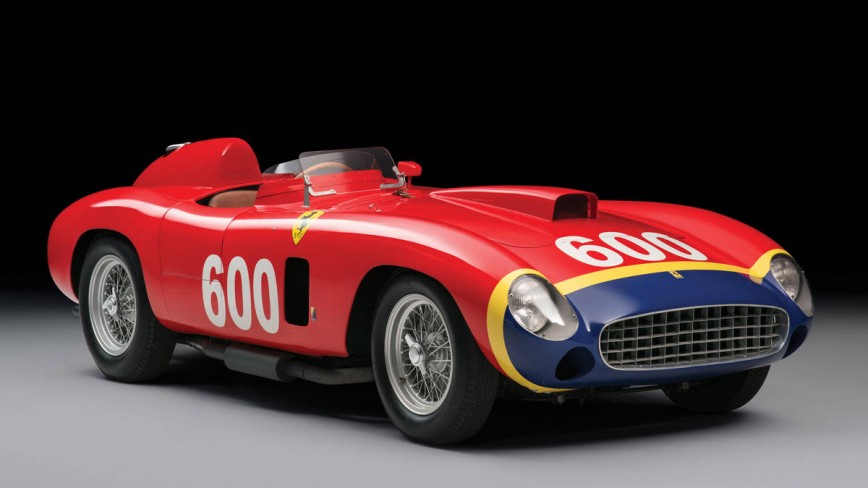 There are certain celebrity names that, when attached to auction-bound cars, send collectors into frenzy. Think Steve McQueen and his jaw-dropping $1.95 million Porsche Turbo; if current trends continue, a run-of-the-mill 930 won’t be worth that much until sometime next May.

Juan Manuel Fangio is another. McQueen had better hair, but Fangio has five World Championship of Drivers titles to his credit. Consequently, the cars he wheeled tended to be a little more intriguing than McQueen’s hopped-up Porsches … like the Grand Prix-winning 1954 Mercedes-Benz W196R, which sold for nearly $30 million back in 2013.

Or this 1956 Ferrari 290 MM by Scaglietti, chassis 0626. One of four built, it’s powered by a 3.5-liter V12. Fangio drove it to a fourth-place finish in the Mille Miglia that year (another Ferrari 290 driven by Eugenio Castellotti took first); according to the RM Sotheby’s catalog, this is the purpose for which it was built. But it wasn’t retired after that 1,000-mile slog. Later, Phil Hill drove it during the Nurburgring 1,000 KM, and Eugenio Castellotti, Luigi Musso, and Masten Gregory took it to victory in the 1957 Buenos Aires 1,000 KM. It was on and off the track until it entered a private collection in 1964.

About twenty years ago, I got a 1/43 scale model of this car and the Ferrari transporter. I always liked the markings on the car.